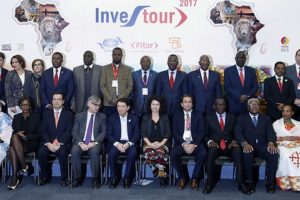 Madrid (Spain) – January 22, 2017 (travelindex.com) – INVESTOUR, a unique platform for tourism businesses from Africa and Europe to meet has convened more than 20 African Ministers of Tourism at FITUR, the Spanish Tourism Fair. The initiative, now in its 8th edition, has taken place on 19 January in a joint initiative of the World Tourism Organization (UNWTO) and Casa Africa.

In the last eight years, INVESTOUR has become a unique platform for exchange of information and for business opportunities in the African continent. The event has counted in its 8th edition with the participation of more than 20 Ministers of Tourism of different African countries who debated the opportunities that the sector can bring to the continent.

INVESTOUR 2017 focused on two main topics: ‘Technology and design of new touristic products’ and ‘Capacity development for youth and women in tourism.’

“INVESTOUR has demonstrated not only the high relevance of such platforms to advance business, but also the immense potential of the tourism sector in the Africa as reflected in the very positive results that the region had in terms of international tourism in 2016” said UNWTO Secretary-General, Taleb Rifai.

“For Casa Africa is a privilege to be one of the joint partners of INVESTOUR as this event has become a major reference for African tourism investors,” said the Director General of Casa Africa, Luis Padrón. “Our goal is to promote exchanges and to create a platform in which tourism professionals from both shores can meet, discuss, understand each other, and to look for ways to cooperate and to grow,” he said.

As 2017 will be celebrated worldwide as the International Year of Sustainable Tourism for Development, sustainable practices have been particularly addressed by the initiatives presented at INVESTOUR.

In 2016, Africa welcomed 58 million international tourists, up 8 % from 2015. According to UNWTO’s forecast, this figure will reach 134 million by 2030. The interest in tourism business in the continent has also risen. For instance, the number of Spanish companies based in sub-Saharan Africa has multiplied by seven in the last five years. As highlighted by the World Bank in 2015, the fast economic growth and the significant improvement of the business climate in Africa opens new perspectives for international companies.

Since the first edition in 2009, INVESTOUR has brought together over 1500 participants from 46 African countries and more than 900 projects have been presented. In 2016, more than 300 participants have attended INVESTOUR, including 14 Ministers of Tourism of Africa and Middle-East and numerous Spanish companies which met with more than 100 projects presented by African stakeholders